You are here: Home » Blog » Behaviour » Are Cockpoos Cuddly?

Are Cockapoos cuddly? The simple answer is yes! The Cockapoo temperament is just one of many awesome traits this popular hybrid dog has. They’re very “people-pleasing” dogs and love affection. When you see this dog for the first time, you might fall in love with its fluffy coat of silky waves. This thick fur is low-shedding which makes them even more cuddly! If you’re looking for a family dog that will love you and your kids forever, then a Cockapoo might be perfect. Do cockapoos like to cuddle? Yes, they do! 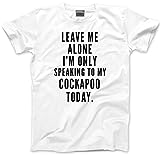 “#cockapoosofinstagram” is a widely followed instagram page with some perfect examples of this cuddly pooch. For example, here is a beige coloured Cockapoo cuddling up to its owner.

Cockapoos love pleasing their owners, and if that means cuddling up to them at bedtime, they will happily oblige. Also, an average adult Cockapoo can sleep between 12 to 14 hours within a 24-hour period. Cockapoo owners would agree these are the cutest dogs on the planet. On a cold night, what could be more irresistible than cockapoo cuddles?  Also, a dog’s body temperature is approximately three to six degrees warmer than ours. Their looks and loving, cuddly temperament have propelled them to be one of the most popular dog breeds on the planet! Dogs are looking for humans to re-create the warmth and security of the litter. This is where they learned to be happy sleeping with others who want to snuggle up. “Speculation among anthropologists that human-canine co-sleeping may even be encoded in our DNA” – Psychologist Stanley Coren. Here is another example of how cuddly your new Cockapoo can be:

#Repost @theellenshow with @repostapp. ・・・ Give someone you love a hug.

As can be observed in the image above, a Cockapoo is a great, cuddly family pet, so hopefully, that answers the question “do cockapoos like to cuddle” as we believe they do. Their tendency to get over-excited can alarm some more stand-offish animals or people. But once they’ve gotten over the excitement of new things, they’re peaceful, sociable, gentle creatures.

Here’s more proof that our dogs love us. Scientists have found that their hearts beat in sync with ours. The bond between owners and their dog is so strong that our heartbeats sync up. Australian researchers separated three dogs from their owners, strapped heart monitors on them and then watched what happened when they were reunited. They found that despite beating at different rates, their heartbeats followed the same pattern. Cockapoos are no different; they love their owners!

The image above shows Cockapoo’s love for its owner and vice versa. The lady shown in the picture has brought her Cockapoo to her wedding day. Now, although I wouldn’t suggest dressing up your dog, this shows how close Cockapoos and their owners can be. A massive moment in someone’s life is being shared, cuddling their Cockapoo.

Just like humans, all dogs are different. Cockapoos like cuddles more than other dogs, but this doesn’t mean your cockapoo will want to be cuddled. When you compare them to the likes of a Doberman, then, yes, they are cuddly.

How many cockapoo cuddles is too much?

Your dog will want its own space sometimes. If you are cuddling your dog and it walks off to sit on its own, then leave them to it. They will come back to you when they want some more cockapoo cuddles.

I don’t have a cuddly cockapoo. What can I do?

Let your dog come to you. Don’t force cuddles onto your dog.