You are here: Home » Blog » Products » 10 Home Made Cockapoo Toys

Have you been to your local pet store recently or maybe even the local supermarket and checked out the prices on dog’s toys? What a lot of the big-name brands expect you to pay for the simplest toys can lead a lot to be desired. Some expect you to pay a whole lot of money for what is essentially a piece of white cord with a tennis ball attached. Some even expect you to pay similar for a bit of rope and a few well-placed knots. 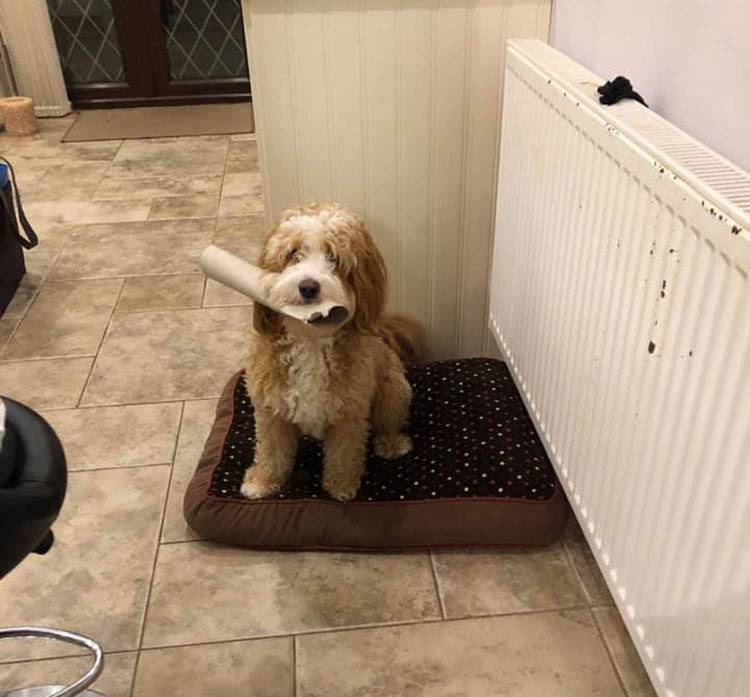 Given how important it is for dogs to have toys to play, you may be tempted to pay these exorbitant prices. After all, you don’t want your cockapoo, a breed of dog that has a lot of energy that they need to expel. They love chewing and tearing at things and if you don’t provide toys, they will look for chewable elsewhere.

The good news is you don’t need to spend as much as the high street stores and even online retailers want. There are plenty of homemade alternatives. To give you some great options, we are going to look at 10 of our favourite cockapoo toys you can make yourself. The idea is that you won’t need to pay out too much for any of these as you may have many of the bits and pieces you need around the house.

Let’s Take A Look At Some

Take one end of an empty roll of cardboard and flatten it down. Then seal that up using duct tape. Next, fill it up with your pooch’s favourite doggy snacks. Flatten the opposite end and then seal that up too. You then need to strengthen the whole thing up by wrapping it up in more duct tape. Your cockapoo will be intrigued by the rattling treats and will work hard to tear it apart to get some of those tasty treats.

The second idea in our guide is this easy to make, but great little toy. You start making it by removing the lid from the bottle and then squeeze as much of the air out of it as possible. Then put the bottle inside a sock and tie off the end with a knot so that the bottle doesn’t fall out. The combination of the texture and the crackling noise of the plastic will drive your cockapoo crazy and provide plenty of hours of entertainment.

Another very easy one, but when it is executed it is the perfect toy for your cockapoo when you head to the local park or just in the back garden. You need to get a piece of garden hose and slide a branch or stick into one side of it. It is important that this fits firmly and tightly. Now curve the hose around push the open part of the hose over the part of the stick that’s poking out.

Walla, a perfectly fun hoop to throw with your cockapoo.

Bonus tip: The same garden hose-based toy can be transformed into a fun flying saucer by covering it with a piece of nylon.

Madness With Empty Bottles of Milk

Take the lid off the bottle and get rid of it. Then stick some of your cockapoo’s favourite snacks inside it and let your dog have fun with it. They will throw, toss, wrestle, fight, scratch and bite at the bottle until they’ve gotten rid of the rattling noise and ate all the treats. There could be hours and hours of fun to be had with this toy.

Take a long piece of fabric and tie a knot as close to the centre of it as you can. Next, tie another knot and then basically keep tying knots until you are left with a massive knot. Trim the ends of the fabric and give it your waggling tailed friend for a lot of knotty fun. They’ll chew and chew at it and it could also work well as a tug-o-war toy as well.

Bonus Tip: Why not take the knotty knot and soak it in some beef stock, chicken stock or water. Stick it in your freezer and then once it has fully frozen, give it to your cockapoo. They’ll undoubtedly love scratching and chewing at the tasty, icy and very knotty toy.

Don’t be a mug and get one of those pricey toys from the shops. Take an old toy, one that your children don’t want anymore, or buy a really cheap one from the charity shops and take all the stuffing out of it. Fasten it back up and pass it onto your pooch.

Rather than spending a fortune on some tug-o-war rope, why not make one and spend a grand total of zero pounds and zero pence on it. Simply take an old and scruffy dish towel that’s not fit for its original purpose anymore and cut two slits all the way along its length at an equal distance apart and stop cutting just before you reach the other end. Now you need to put your braiding skills to good use. If you’ve never braided hair before, just watch a YouTube video and braid the towel in exactly the same way. Tie the ends in knots and hey presto you have a cheap as chips tug-o-war rope toy for your dog to enjoy.

Cut or drill into either side of the ball to make a hole that’s big enough for the rope to slide into it. Then slide the rope inside it and right through the other end until you have the ball in the centre of the rope. Tie knows into the rope at either end of the ball to hold it there and then give your self some gripping spots by tying knots into the ends of the rope. All that’s left to do after that is challenge your dog to a battle.

Put the doggy snacks into one of the socks and then ball it up in a similar fashion to when you are putting it away in your sock/underwear drawers. Now place that sock inside the other sock and tie a big old knot into it to keep the inner sock in place. Give it to your cockapoo and watch him or her get excited as they smell the scents of their favourite treats. They’ll spend ages trying to get to the crunchy goodies inside.

Put the tennis ball into the sock until it’s all the way inside the toe end. Tie a knot just a little bit above where the sock is to keep it in place. That’s really all there is to it. Give it your dog and watch them have more fun with something that took you a couple of minutes to make than those expensive plastic things you get at the shops that break within half an hour.

There you go, folks, some truly simple, but effective homemade toys you can give to your cockapoo. As well as saving you money, you will enjoy the amount of fun and entertainment they give your dog a lot more knowing you made them yourself.