You are here: Home » Blog » Care » Cockapoo in Season

One of the most common causes of concern for owners of female Cockapoos is the female dog’s ‘heat’ or season. This is the term used to describe the reproductive cycle of your Cockapoo. The season consists of 4 distinguishable phases – proestrus, estrus, diestrus and anestrus. During this period there will be behavioural and physical changes in your Cockapoo that you shouldn’t worry about as it can, of course, include, bleeding from the vulva.

A female Cockapoo’s first season usually happens when they are between 6 and 12 months old.  But it can occur when they are younger or older and occurs twice a year. While the length of each season can largely differ between dogs, the average length of each season is 3 – 4 weeks although some Cockapoo’s do have seasons that last as long as 6 weeks, so don’t worry if your Cockapoo’s lasts longer or not as long. Despite this variation, once it is established it is often fairly regular and you can predict and establish when your Cockapoo is in season confidently. 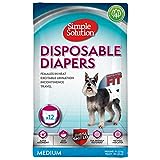 During the first season there will be some obvious changes in the behaviour and personality of your female Cockapoo, some of which will increase as the season progresses. Some of these common changes you will notice include: Changes in appetite, restlessness, increased urination, abnormal clingy behaviour, or she may become distant and not want to be around you as much, changes in obedience, vulval swelling and increased licking of her genitalia, bloody discharge from vulva, increased interest in male dogs, standing with back facing the male and moving her tail to one side and not protecting her genitalia. As you can see there are many changes that can occur but try not to worry. It can be stressful but you’ll get the hang of it.

What you need to do

Although you shouldn’t worry about these changes in your Cockapoo. There are some things you must do to manage her during this period. You will need to supervise your female Cockapoo at all times. If you have a male dog in the same household they should never be left alone together unsupervised.

Even neutered males will attempt to mate and can become ‘tied’ with your female. I’ve seen this happen and it’s not fun to deal with. Some owners find it best to try and find temporary care for the male dog to avoid accidental matings.

Some owners also decide not to take their Cockapoo out during this time but exercise them instead in the house or garden (a dog door is a good way for them to let themselves in or out). This isn’t something I can recommend as taking your dog out is as much about physical exercise as it is mental stimulation. So keeping your dog inside for weeks at a time without taking her outside for a change of scenery can make her restless.

If you do decide to carry on exercising outside the home, always ensure your Cockapoo is kept on a lead. Also switch your walk times to times where it is less likely to see other dogs about, perhaps earlier in the morning or later at night.

However, if another dog is approaching in the distance you can also just divert to another pathway or across the road if possible. You should try and avoid local parks and other routes that are used by other dogs. Look for less used dog areas during this time that your female is in season.

Other dogs will get the scent of your Cockapoo in heat and follow it so some owners recommend taking your female in season out in the car, away from the house and walking them in a different area. This prevents other dogs from being able to follow the scent back to your home and causing an issue.

An increasing number of owners now use specially designed disposable nappies when their female Cockapoo is in season. It does prevent blood drops in the house. However, others like to use them as a level of protection against the unwanted attention of dogs when they are out, although they won’t stop a determined male from attempting to mate. So the decision is entirely yours.

Your female will usually clean themselves during this time but you may want to put an old towel on her bed or to your protect furniture, although spotting is often reasonably minimal.

If you do become concerned or need to take your in season Cockapoo to the vet for another reason, you should alert the vet ahead of time you’re bringing in a dog that’s currently in season.

That way they can schedule a time where they have no other dogs in the clinic and can minimize the risk of an accidental mating or an issue with other dogs. It also allows the team at the clinic to clean after you’ve visited to reduce risk of dogs coming in afterwards getting the scent of your in-season Cockapoo.