Poos or doodles, to be honest, it’s all the same to us. No, we’re not talking about playtime down at the local nursery, we’re looking at the difference between Cockapoos and mini Goldendoodles, popular designer dog breeds.

We get a fair amount of questions from readers asking which one is better, and if we had to choose, which one would it be. There’s no straightforward answer. It’s like asking a mum, in front of her children, which is her favourite. In front of them, she’ll say she loves them all the same. Get her on her own, and she might open up a little more, saying she loves little George the most when he’s in a particularly mischievous mood, but she’s got a real soft spot for Lucy when it comes to bedtime, with all the cuddles and loves. 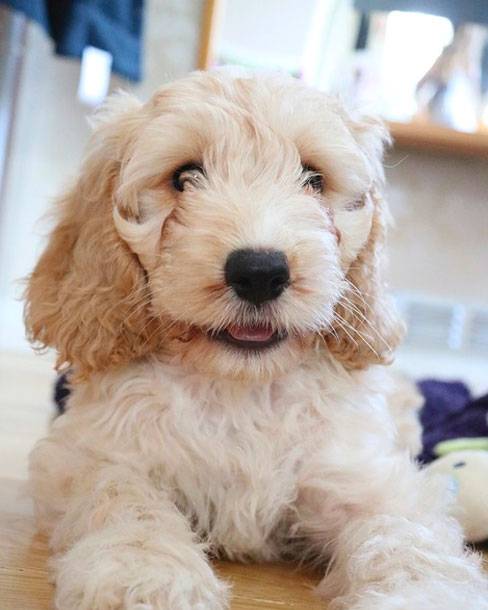 What is the Difference Between a Cockapoo and a Miniature Goldendoodle

In case you’re not familiar with a Cockapoo, it’s a hybrid mix of a Cocker Spaniel, and a Poodle. While it’s more commonly referred to as a Cockapoo, other names include Cockerpoo, Spoodle, or Cockerdoodle. A Mini Goldendoodle, or a Curly Golden, on the other hand, is a cross with a Miniature Poodle and Golden Retriever.

The idea behind designer dogs is that they’ll have the best qualities from the two breeds, which is what makes them so popular. What sometimes happens though is because it’s still a crossbreed you’re never 100% sure just what kind of pooch you’re getting.

Cockapoo vs. Mini Goldendoodle: What We Think

If you’re trying to decide between a Cockapoo or a mini Goldendoodle, we need to tell it’s going to come down to your personal preference, because both breeds have their endearing features (we sound like that mum that’s being asked about her favourite kids, don’t we?)

Both are very smart, which makes them good with children and easy to train. They are friendly and loyal, and are perfect additions to the family, even if you already have other pets. They are also great therapy and service dogs.

Let’s take a look at cockapoos first. Because you’re mixing a Poodle and a Spaniel, Cockapoos come in just about every colour. Think apricot, sable, chocolate, black, black with white patches, tan and black, red and white…and the list goes on.

Goldendoodles are also available in different colours, but are generally golden or honey. Some pups have combinations of colours, but it’s got a lot to do with the breeding and its parents.

The original designer dog, the Labradoodle, (a Golden Retriever and Poodle) was initially bred to create a hypoallergenic dog. Unfortunately, there’s no such thing, but you do get dogs that shed less than others. The good news is both the Cockapoo and the Mini Goldendoodle are low shedders with very little dander.

Anyone planning on getting a dog should think about its exercise needs. Again, both the mini Goldendoodle and the cockapoo do equally well in apartments or homes with large gardens. They adapt to their living conditions well, but all dogs need walks on a daily basis, and ball games certainly never did any dog any harm.

For us, when it comes to choosing either a Cockapoo or a mini Goldendoodle, there’s no favourite. It’s like being offered a milkshake, or a piece of cake…we take both.

Other choices to consider are: