Designer dogs have a lot going for them. The Cockapoodle, thanks to its good looks and affectionate nature, is fast becoming one of the most popular hybrid breeds in both the UK and the USA. There is also the Labradoodle, the Spoodle, the Puggle. And of course, the Chiweenie (try saying that without smiling).

But have you heard of the Doxiepoo? Also called a Daschshundpoo, a Dachshunddoodle or a Doxiedoodle, the Doxiepoo is a Cockapoo and Dachshund mix, and what this pint-sized pooch lacks in size, it more than makes up for in the personality department. 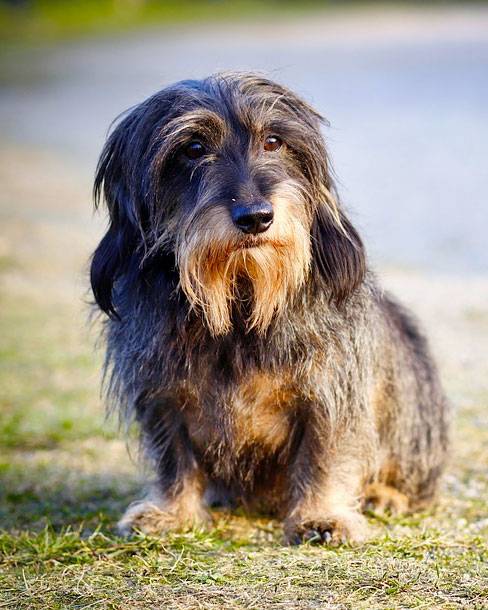 Cockapoo and Dachshund Mix At a Glance

There is no such thing as a typical Doxiepoo. In fact, unlike other hybrids that were mixed because of the breeds’ similarities, the Doxiepoo seems to have been created in spite of the differences.

It is fair to say that of all the cross-breeds, this is the most unpredictable in both character and appearance. At a glance, however:

From a peewee pup that stands around seven inches high to one that stands tall at 23 inches, there is no way of knowing what a litter is going to look like, let alone each puppy in it.

The coat can be curly and thick, like a Cockapoo’s, or short like a Dachshund’s. It can also be long and wavy, scruffy, fluffy, or even wiry. And colour-wise, well, your pup could be brown, grey, black, tan, cream, white, or apricot, or a combination of any of these.

One thing is for sure though, it is a small dog that needs to be handled with care. In other words, it won’t be the ideal first pet for your toddler.

Even the Doxiepoo’s character is unpredictable. As a rule, the mix is lively and playful, with a slightly mischievous streak. They are a breed that takes themselves very seriously (which is hilarious to watch), and as a result are excellent watchdogs.

Fiercely loyal and protective, this cross-breed makes a wonderful companion but can be somewhat territorial.

The breed is curious and “talkative”, and are prone to excessive barking and digging if they get bored. If left alone for too long, they can become quite destructive in their behaviour, and experience separation anxiety.

At best, your dog will have the Cockapoo’s intelligence, trainability and affectionate nature, with the Dachshund’s independence and confidence.

Or, you could end up with a stubborn, highly strung, yappy, snappy pooch that is wary of people and other animals.

If you are thinking about getting one of these slinkies with fur, it is worth looking at how he or she interacts with the other puppies in the litter.

Like its looks and temperament, a Doxiepoo’s trainability will vary from one dog to the next. In theory, with the Cockapoo’s intelligence and need to please, they should be fairly easy to train. But if it is more ‘Dachs’ than ‘Poo’ you will have a tough time trying to convince it to do anything.

As with any breed, socialisation as a puppy is a must. With a Doxiepoo however, you will need to continue this, even as they get older.

Both the Dachshund and the Cockapoo have a fair amount of health issues, which could very well present themselves in this particular mix.

Most commonly, Doxiepoos are prone to:

Other health issues include:

Patellar luxation is when the kneecap slides out of place, causing lameness. Both breeds are prone to this condition.

This is a severe spinal condition, especially prevalent in Dachshunds because of the breed’s short legs and long back. This can lead to acute inflammation and pain, and in severe cases, paralysis.

Hip dysplasia is another condition that affects both the Dachshund and the Cockapoo. The hip joint doesn’t develop properly, which causes arthritis,

Cataracts and progressive retinal atrophy are just two eye conditions most breeds are known to suffer from. Dachshunds are at risk of sudden acquired retinal degeneration syndrome, which causes an unexpected and sudden loss of vision.

Most dogs suffer from a number of health issues, and the Doxiepoo is no different. We would recommend you only buy your dog from a responsible and ethical breeder and check all the necessary paperwork.

You will also need to take your dog for regular checkups at the vet.

Believe it or not, the Doxiepoo is known to overeat and loves treats. It is best to limit their treats, and not feed them food from the table.

Their diet should consist of protein-rich foods like chicken, salmon, liver, and lamb, and if possible, a raw diet it preferable.

If you decide to feed your pooch dry kibble, make sure it is packed with minerals and add olive oil to prevent any skin conditions.

A Doxiepoo, with the short legs of a Dachshund, doesn’t need a lot of exercise. But regular walks around the neighbourhood, visits to the local park, as well as games of fetch and tug of war will keep the boredom away.

There is no doubt that the Doxiepoo is one cute-looking dog, but the mixed breed does have its fair share of detractors. This could be due to some of the serious health concerns and its somewhat unpredictable nature. But proud ‘pawrents’ of this unique breed wouldn’t change their fur babies for the world.